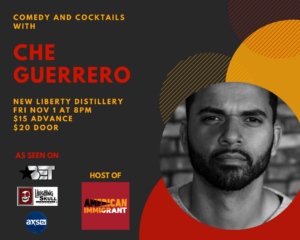 The North American Comedy Brewery & Distillery Tour invites you to experience an amazing evening of comedy’s finest, while enjoying superb craft-cocktails made by NLD’s in-house mixologist as well as a great selection of local craft beers and wines!
This Friday! We’re excited to have comedian Che Guerrero headlining an evening of laughs at New Liberty Distillery! This is a night out in the Philly area that you do not want to miss! Discounted Advance Tickets are still available for $15.00. Tickets will be $20 at the door.
About Che: Che Guerrero may be a familiar face. He has appeared on several media outlets. In 2014 and 2015 he featured on AXS TV’s Gotham Comedy Live amidst a roster of world-renowned Comedians.

In 2018 he was on 50 Central on BET as part of their Artist Spotlight Series. He also featured at the NXNE’s Comedy Film and Music Festival as well as The Laughing Skull Comedy Festival.

There’s no better way to experience live comedy. All YOU need to do is come ready to laugh!