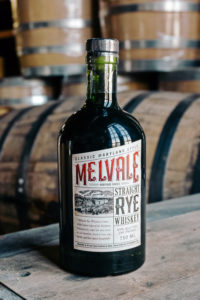 The Melvale Distillery, maker of Melvale Rye Whiskey, was located in the Jones Falls section of Baltimore by John T. Cummings in the 1880s. One of the original buildings remains intact, although the site no longer distills alcohol. Melvale Pure Rye was one of the most premium of the pre-prohibition Maryland Ryes.  In its day, the Melvale brand became one of the most prestigious and respected of Maryland’s rye whiskeys.

This medium body spirit is true to its roots, with a great balance between the initial sweetness, muted rye spiciness and oak influence both on the nose and in the initial sip. It starts with honey and vanilla notes but finishes with a softened note of rye spice and a taste of cinnamon, pepper, and sweet honey.